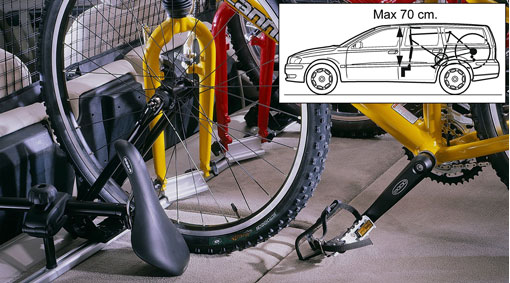 The accessory for anyone who wants to take extra care of their bicycles. This holder can be used to transport two bicycles inside the car, well protected from the weather, wind and tampering individuals.

Suitable for all bicycles with a maximum of 70 cm (27.6 in) between the front wheel hub and the highest point on the handlebars.

The bicycles are mounted standing, somewhat diagonally, by removing the front wheel and securing the fork in the carrier. This angle prevents the bicycles from moving forward in the passenger compartment in the event of sudden braking or a collision. The bicycles are secured by fastening the rear wheels with the straps included in the kit.

The seat is removed from the bicycle and secured in an adapted holder. The front wheel also has its own holder to prevent loose components from being thrown around in the load compartment.

To provide protection in the event of a collision, the protective net should be used when bicycles are transported in the load compartment.

Cannot be used in combination with the protective grille.