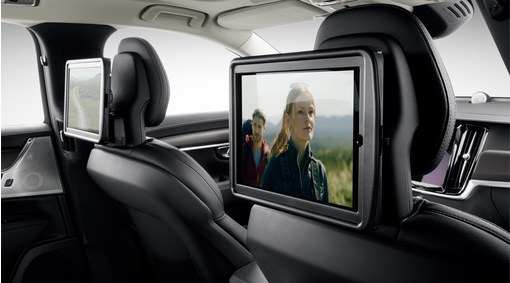 With "Media Server" you will never get bored on a car journey. By using a wireless connection to "Media Server" from your tablet or smartphone, you can choose your favourite entertainment such as films, photos or music.

"Media Server" is an advanced media player for tablets and smartphones which means, for example, you can take large amounts of films to the car. Because you add the media you want to play, "Media Server" is completely independent of network coverage, data traffic limits, or surfing costs.

Save your films, photos or music onto a USB device1that you simply connect to "Media Server". Using the application downloaded onto your tablet or smartphone, you can choose entertainment based on the selection available on the USB device. Connect a USB hub to allow you to play back media from different USB devices at the same time.

For as safe and comfortable use as possible, iPad® holder is recommended.

Digital-TV option can only be used in the following markets: Europe (excl. Germany), the Nordic countries, China, Korea and Taiwan.

Over time, the TV standard will be changed in certain countries, such as in Germany where 4k Ultra HD is now being offered through H.265/HEVC. Volvo's "Media Server" does not support TV broadcasts through H.265/HEVC. Check what applies in your country.